If you’ve been following our news posts you’ll know that Striking Places have had a busy year with the Horticultural Trades Association. It began with attending the HTA Technology Conference in February 2016. The HTA asked Jo Hailey, our MD, to speak to the conference delegates about how the horticultural industry could benefit from Google Street View Trusted tours, Google in general and how to improve online presence. In April 2016 we announced becoming Cost Reduction Scheme partners with the HTA.  Striking Places Announce Partnership with the HTA.  In late June 2016 we were pleased to be invited to exhibit at the HTA National Plant Show as a partner and to create a 360 virtual tour at the event.

The HTA National Plant Show has been taking place at Stoneleigh Park for the last seven years. Stoneleigh Park is a huge and impressive business complex in Warwickshire.

The 2016 National Plant Show officially opened on Tuesday June 21st. All 160 of the industry exhibitors arrive the day before to set up. We arrived at the event venue on Monday afternoon to lots of hustle and bustle. Exhibitors were hurriedly unloading vans and lorries, transporting a gorgeous array of flowers and plants into the hall. The smell was absolutely intoxicating. We unloaded our decidedly less flowery gear from the van and set up the Striking Places stand. By the time we’d finished we were quite happy with how it looked, but something was missing. Can you see what? 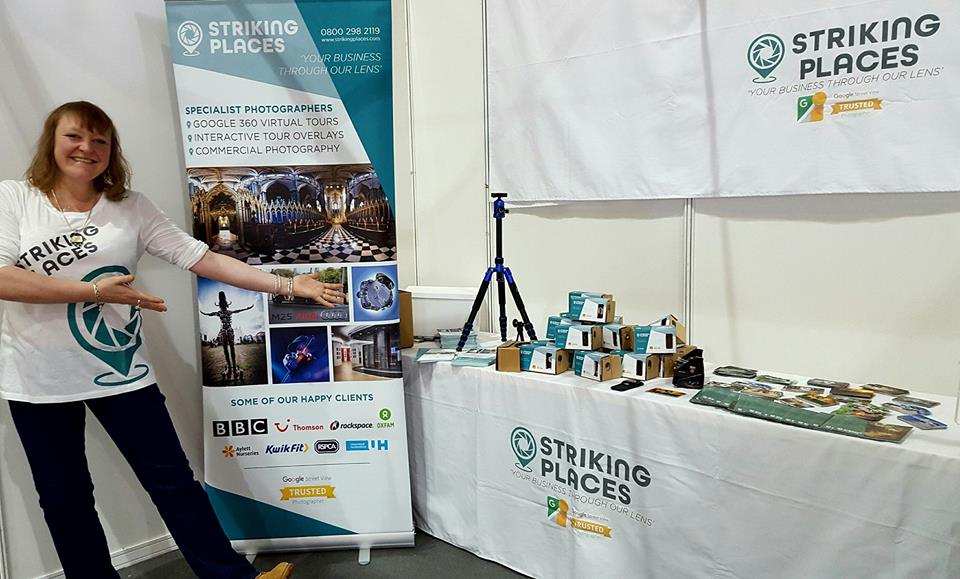 Flowers of course! Tim Bell of the HTA happened to pass by and was kind enough to arrange for The Plant Yard to lend us some beautiful orchids to top off the stand perfectly. Ahhh! That’s better! 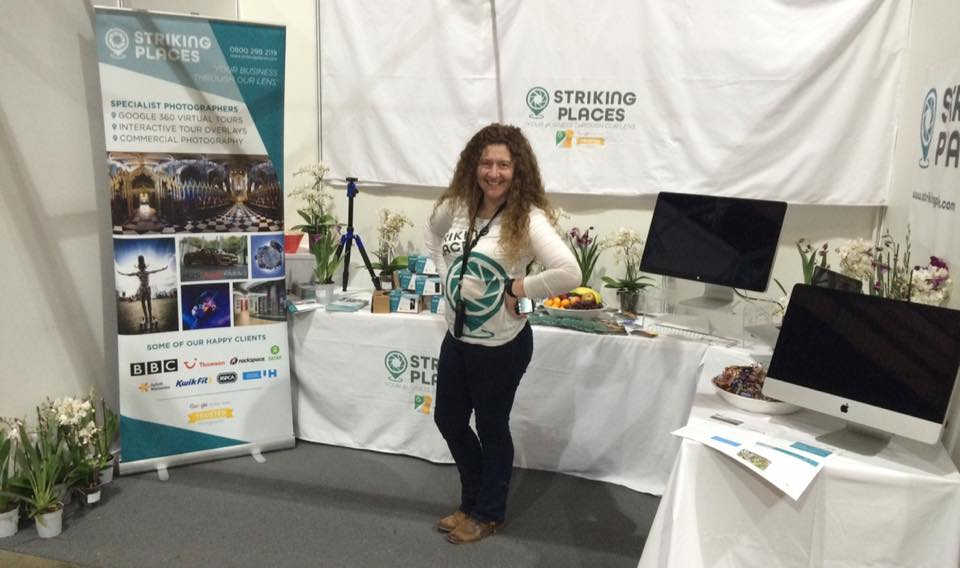 Exhibitors had until six in the evening to have their stands completed and be out of the hall. This is when Striking Places would spring into action. The plan was to capture, upload, process and publish a virtual tour of the National Plant Show so that we could demonstrate it to visitors and exhibitors alike the following day. The HTA would also publish it on their site so that a virtual tour of the show would be live at the same time as the show was actually going on.

Of course by their very nature, moving plants and flowers around is a messy business. Six in the evening is also when the cleaners sprang into action, diligently cleaning each and every stand and aisle, sweeping up earth and stray leaves. As a result, Jo decided the best thing to do was to follow the cleaners round as they worked, shooting 360 images. Striking Places had carefully planned the route of the tour with staff from the HTA beforehand. It included the six key areas of the show: The Retail Concept Experience, The Glasshouse Cafe, Hortipack Hub, the New Plant Area, the Seminar Area, and of course the HTA Village.

The Striking Places Team was up against it; there was a weak internet connection where the mobile office was camped for the night, on top of the existing time constraints. We worked tirelessly till the early hours. Our hard work paid off. We set a Striking Places record, completing the the virtual tour from shoot to going live in under 12 hours! We were thrilled!

Despite the late night we were up bright and early the following morning.  We were ready on our stand when the doors opened at nine. There followed a very busy two days. Exhibitors and visitors at the show included; garden centres and industry suppliers such as Allensmore Nurseries, Barton Grange, and Swarkestone Nurseries; interested students from the Homebase Horticultural Academy; industry supplying growers like the Bransford Webbs Plant Company.

We had a lovely time catching up with our old friends from Aylett Nurseries. It was also great to chat to those also offering different technological and marketing solutions. Among them was the Syngenta Team, who we met at the technology conference earlier in the year. We made lots of new friends as well, not least the lovely lot at Happy Plants. Their complimentary mugs joined us travelling around in the Striking Places mobile office on our next job in France.

The HTA National Plant Show is a huge exhibition. The tour featured many of the stands, but not all. A few of the exhibitors who visited us were disappointed they didn’t appear in the virtual tour. We were happy to remedy this by shooting and processing a single panorama of their stand.  They could then embed this on their Facebook page. We also talked to the exhibitors whose stands do feature in the tour and showed them how to embed it in their website. This was a fantastic way to demonstrate the potential of Google Street View Trusted tours and to permanently capture stands at the HTA National Plant Show. Below you can see the single bespoke panorama of our stand that we used on our Facebook page.

We left Stoneleigh Park on Wednesday 22nd June with many new contacts, very tired and smelling of fresh flowers. We were well stocked with pens, receptacles and Gerberas. The mobile office also carried two very beautiful potted willow wands from the very generous Willow for Wellbeing. Perfect for Jo’s garden. Striking Places can’t wait for the HTA Glee in September!