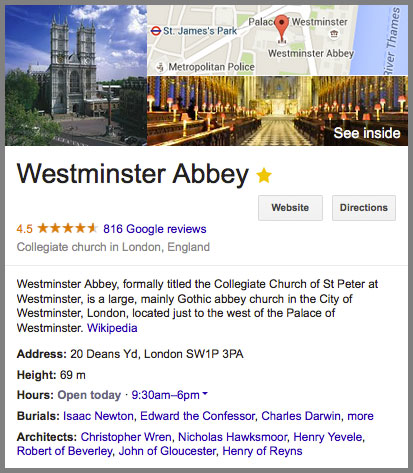 We are delighted to have been engaged by Westminster Abbey to create an interactive virtual tour for the Education Department to share the wonders of the Abbey with people across the globe. Before we delve into the detail of what it takes to deliver a virtual tour of this magnitude, we’re going to take a look back at the history of the Abbey to help set the scene.

A bit of history

Westminster Abbey is one of the oldest churches in the world, with the site going back over 1000 years. It has hosted every coronation since William the Conquerer in 1066 and numerous Royal weddings, including the current Duke and Duchess of Cambridge. Over 3,300 notable people are buried there, including 17 monarchs, Charles Dickens and Jane Austen. It contains the grave of the Unknown Warrior, which has become something of a shrine on which visiting dignitaries now traditionally lay flowers. It also houses the spectacular Cosmati pavement, an astonishing mosaic laid in 1268, comprised of an array of beautiful stones differing in size, shape and colour and depicting the planet and the animals who inhabit it.

How the work came about

The education department at Westminster Abbey had been keen to incorporate digital technology into raising its profile and encouraging engagement for some time. Their idea was to increase access to the Abbey for everyone, regardless of location or ability to visit in person. When the marketing team saw the opportunity to extend Google Street View inside on their Google My Business page, they presented the option to the education department as a possible solution. Westminster Abbey’s then Digital Marketing Manager, Alistair Wallace, requested more information through their page, and we arranged a consultation.

For the initial meeting, both teams walked through the Abbey to confirm the layout of the virtual tour and the areas of special interest the Westminster Abbey team wanted to pinpoint. We could recommend the best configuration to highlight the key areas and describe how the filming would take place. The plans were laid for the rather exciting, forthcoming work.

As you can imagine, a day barely goes by without the Abbey being full of inquisitive tourists. The number of people visiting the Abbey each year has exceeded 2 million. The timing was going to be crucial to this project. Therefore, not only avoid a daily abundance of tourists, but we must remember that Westminster Abbey is a place of worship and has regular services as well as other high-profile events.

With all the activities in the Abbey, we had to find the best time to shoot the virtual. Of course, having been around for a while and attracting a lot of attention for other filming and photography, the Abbey already has an allotted time. Filming and photography are restricted to between 7 – 9.30 am on Thursdays. Although it would’ve been easier to have the whole place to myself, I did have to work around Peter Snow from Channel 4 on one of the days.

Creating a virtual tour is often a one-time event; everything must look its best at the time of capture. Some areas of the Abbey needed some repair and cleaning before work could begin. A building of this age and magnitude needs a fair bit of work on an ongoing basis. If you look closely through the virtual tour, you’ll see some cleaning work still in progress while the virtual tour was being shot.

We received a notification some months later that everything was ready. Work began on 10th September 2015 and took place over seven early morning visits. I have a lovely personal interest story about working at the Abbey and why it is particularly special for me. I’m going to write it up shortly for the website.

In between visits, I was able to process the HDR imagery and present previews of the work to date to the education department, which helped to structure the project as a whole.

One of the key elements Westminster Abbey wanted to incorporate was the ability to share information at special interest points throughout the tour. This can be best provided with an interactive overlay, enabling the user to identify hotspots and embed images, videos or links, giving the viewer a rich digital experience.

For example, in the case of the High Altar, you can only get so close when physically visiting the Abbey. On the tour, you can approach much more closely and click on a hot spot which gives information about the history of coronations at the Abbey and British Pathe news footage of Queen Elizabeth II’s coronation. The interactive overlay also provides a table of contents, enabling the viewer to select their special place of interest and be transported straight to that spot in the Abbey.

The virtual tour shooting of Westminster Abbey was completed and published on Google Street View on 6th June 2016. The 175 panoramas and 2,100 individual images received nearly 4 million views on Google Maps in almost four years.  During the time it took to shoot the virtual tour, the Education Department and our overlay creator, Brandon, worked on writing and collecting imagery and video footage to use in the overlay.

Once the virtual tour was published, we imported the imagery into TourDash, where the overlay creation began. You can see the first instance of the overlay embedded in the Westminster Abbey website. Schools can book a time with a Learning Officer from the Abbey to help bring the virtual tours to life with a virtual guided tour.

Further plans by the Education department quickly came together as they delighted in the success of the first virtual tour. Subsequently and collaboratively, we produced four further interactive overlays that describe other areas relevant to Westminster Abbey. These are interactive virtual tours for

When we started our work at the Abbey, the upper level, or Triforium, you can see as you look up from below was a dusty, very old store room of sorts. Since then, this space has been transformed into a marvellous museum and gallery. There is no virtual tour of this to date. If you want to see how wonderful it is, you’ll have to visit in person. 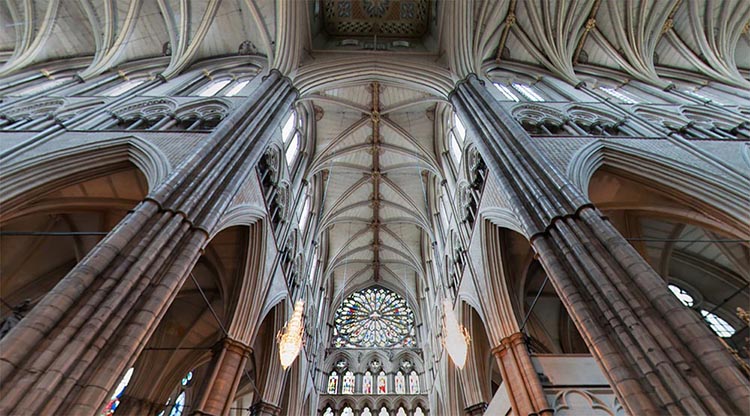 View of the Triforium at Westminster Abbey

Of course, we were proud and delighted to be involved in such a wonderful project, but life goes on, and we continued work on other projects. We were booked to work on several projects across France. A wedding in the Dordogne, a luxury holiday villa in Provence, a row of delightful holiday cottages and a chateau in Burgundy. Admittedly another exciting and fabulous project to work on. The long journey in the mobile office reached a relaxing standstill for a few days before travelling back to the UK. We were taking a well-earned break at a campsite with a beautiful lake and enjoying the peace and tranquillity of the French countryside. When we received a phone call……

How exciting a call from BBC London News. How exciting they wanted to interview us to be on the telly! Westminster Abbey had sent out a press release. We packed up and hotfooted it back home tout de suite.

We are immensely proud of our work at Westminster Abbey and honoured to have some great reviews of our work, which you can read below.

The Very Reverend Dr John Hall | The Dean of Westminster
“We have been pondering how to extend to young people and others, who cannot for the time being visit the Abbey, something of the experience available for our many visitors. I am delighted that this new collaboration will enable people from Timbuktu to Kalamazoo and beyond to see and learn so much more than previously about the magnificence and significance of this great and beautiful Church.”

Charles Armstrong | Street View Product Manager at Google
“This beautiful collection highlights the splendour of Westminster Abbey, the value of Street View publishing, and some truly exceptional imagery on the part of the photographer. We’re delighted to see and support awareness for such powerful content.”

Interesting Fact #93: Westminster Abbey houses the original tomb of Robert Gascoyne-Cecil, the third Marquis of Salisbury and three-time Prime Minister to Queen Victoria, a replica of which features in another of our historic building tours, that of St Etheldreda’s Church, which is part of the Hatfield House complex. The two buildings have been linked since their inception, and both play a major role in the history of the British royal family.

Looking for a 3D tour of your business? Learn more about Striking Places 360 virtual tours and Matterport photography technology or get in touch today.