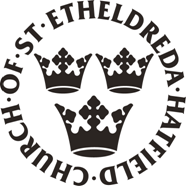 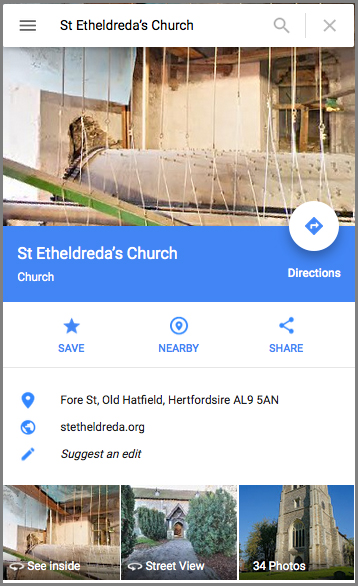 St Etheldreda’s Church is part of the Parish of Bishops Hatfield and Diocese of St Albans. Located on the outskirts of Hatfield House, the church has strong links with The Bishops of Ely who were the original owners of the manor from 930 AD. Steeped in history the church’s oldest surviving parts date back to 13th century, including the chancel and transepts. The tower, that once had a steeple, and the Brocket Chapel date back to the 15th century when The Old Palace was built. The tower has five levels; the ground floor; the bell-ringers platform; the carillon and clock; and the bells and the top of the tower with views over The Old Palace and Hatfield House.

The Google virtual tour of St Etheldreda’s historic church is part of a larger project for the Gascoyne Cecil Estate that includes twenty locations within Hatfield House and The Stable Yard. The project was commissioned by Elaine Bailey, Events & Exhibitions Manager at Hatfield House and has taken several months to shoot and publish. One of the biggest challenges of the project was the creation of an individual Google Plus page for each separate location. Google Plus pages are not centrally managed by the Hatfield House team because each page belong to a separate business. Creating and optimising Google Plus pages is something that Striking Places now offer as a service, due to popular demand.

The 360 virtual walkthrough of the church encapsulates the beauty of this historic working building. The tour utilises Google’s multi-level feature to easily navigate through the church and each level of the tower. The Salisbury Chapel is home to the Tomb of Sir Robert Cecil, Lord Treasurer to Queen Elizabeth I and First Earl of Salisbury. The adjacent one is a monument to Robert Gascoyne-Cecil the third Marquis of Salisbury and three-time Prime Minister to Queen Victoria, and is a replica of the tomb in Westminster Abbey.

St Etheldreda, also known as Audrey was a Saxon princess who was married to Tonbert, Prince of the Fenmen (a marriage never consummated) and received the Isle of Ely as a wedding gift. After his death, a year later, she was married off to Ecgfrith, son of King Oswy of North-umbria. After two years he consented to her entry into a monastery at Coldingham and due to her dedication to virginity as a Bride of Christ she took the veil. However, a year later, her husband, miserable without her, set out with an armed band to get her back. Audrey set out for Ely to escape and take refuge. As she reached the Island of Ely, as it was then, the tide came up and stayed up for seven days, convincing her husband that she had God’s protection and so he gave up the chase. Meanwhile Audrey founded the Abbey of Ely where she lived a life of great austerity and piety until her death in 679 AD. The connection of the Bishop’s Hatfield with the See of Ely makes this church one of the very few dedicated to this saint.

# Interesting Fact No 8: There were originally five large bells in the church tower and the pub on Fore Street was called The Five Bells. Later 3 new smaller bells were added and the pub’s name also changed to The Eight Bells.