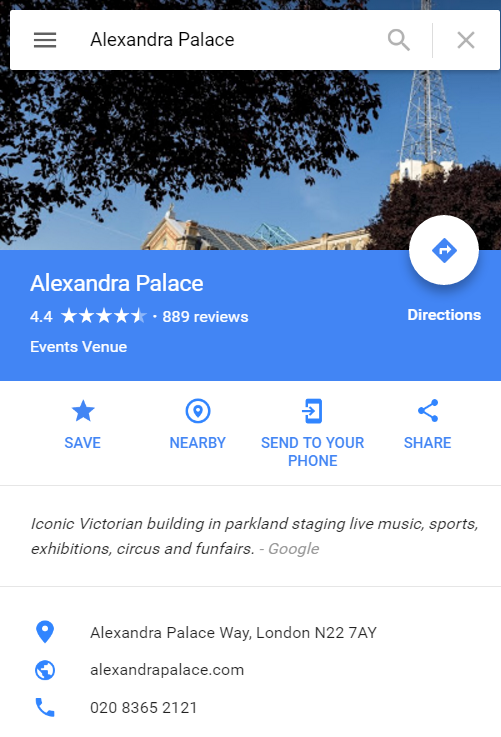 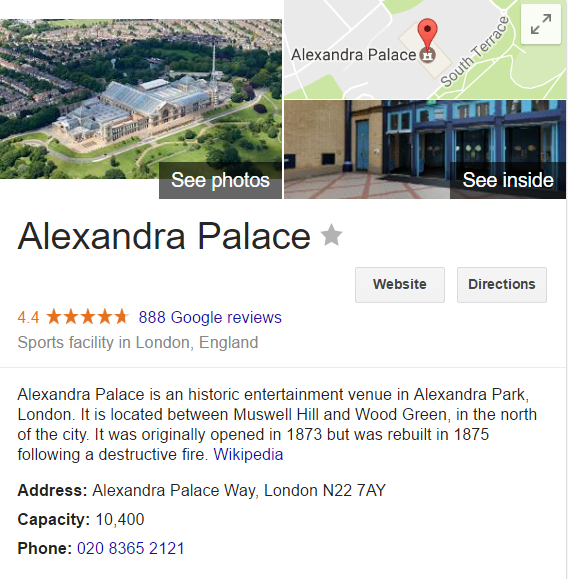 The beautiful building of Alexandra Palace – known locally as Ally Pally – is a historic entertainment venue near Muswell Hill.  Dubbed the Peoples Palace, it opened in 1873 on Queen Victoria’s 54th birthday with a grand celebration including concerts, recitals and fireworks. It had to be closed after tragedy struck only 16 days later when a fire broke out in the kitchens. The second opening of the new Alexandra Palace came about in 1875 and it has since been host to some fantastic historical events; the building of Dr Barton’s airship, a Nelsons Centenary Ball (where a full-sized replica of Trafalgar Square’s Nelson’s Column was brought into the Great Hall!), housing Prisoners of War during WWI, being the place the world’s first high definition public television was broadcast in 1936 and hosting thousands of world famous bands and weekend festivals.

Damaged by fire twice, the first time only sixteen days after its opening, and secondly in 1980, this spectacular building has developed and changed dramatically through the last 140 years. Boasting many vast indoor spaces and incredible external panoramic views it’s surprising a Google Street View Trusted Tour has not been done before.

Most of the Striking Places team grew up within view of Alexandra Palace, so it holds a special place in their hearts. On discovering no virtual tour of the epic building existed we contacted the Alexandra Palace’s head of marketing, Martin Keane. As luck would have it Martin had just been looking into a 360 virtual tour for the site as part of the ongoing regeneration project. We arranged for a consultation immediately. Even knowing the building well it’s only when walking around we realised the enormity of the project. The Striking Places team were able to advise on the best way to highlight the buildings many attributes.

After originally being developed as a private financial concern, Alexandra Palace was made a charitable trust in 1900, then was handed over to Haringey council in 1980. It now runs as Alexandra Park and Palace Charitable Trust, a registered charity responsible for the upkeep of the building and the grounds, for the benefit of the public, forever. Although much loved for sporting events, exhibitions and concerts, around 40% of the building is currently derelict – including the Palace’s most historic spaces, the BBC Studios where television was first broadcast, and the Victorian Theatre.

In March 2015 it was awarded £18.6 million by the Heritage Lottery Fund towards the restoration of the East Wing. This project will include the refurbishment and reparation of the eastern end of the Palace, including the BBC studios and the beautiful Victorian Theatre – unused for nearly 100 years. Whilst Haringey Council also pledged some money towards the project, the Charitable Trust is working hard to raise the remaining £1.2 million. A virtual tour would not only demonstrate the splendour of the building to potential donors but also increase footfall and revenue from worldwide visitors. Perfect timing!

We shot the majority of the tour over two long hot days in August 2016, working closely with Martin throughout. Considerations such as consistent lighting, given the blistering sunshine, and the best time of day to catch features like the spectacular rose window housed at the front of the Great Hall largely dictated our route. Equally working around busy staff setting up for events had to be considered. We shot from high up in front of the Willis Organ, as well as directly outside the Rose Window, getting an even more stunning view that usual.

From high in the sky to underground low; in the end it was decided we would do some 360s of the Victorian Theatre – Striking Places donation to the regeneration project – which has no daylight at all and is lit with only floodlights. This was naturally tricky, and the Striking Places 360 camera struggled to absorb as much light as possible for the shots of the half-finished theatre floor, original stage, curtains and immaculate gods. A decision was made on the day to shoot the basement too, which lies behind Traitors Gate. This amazingly untouched area in the bowels of the building houses discarded objects from the Palace from the last 140 years. The brick ovens where the original fire started sit next to cells converted to put prisoners of war when being punished in 1914. Wrought iron spiral staircases lie next to victorian glass bottles and seventies telephone signs.

Alexandra Palace has so many contrasting areas, from deep underground to the stunning views over London. Its multi-functionality as venue and show space make a Google Street View Trusted Tour a necessary part of conveying the scope of the site. During this crucial period of its history, where raising money to rejuvenate forgotten areas as well as maintaining its existing beauty is paramount, the 360 tour is a valuable marketing tool.

“As a multi-award winning destination we maintain our original enterprising spirit by hosting an eclectic mix of live music, sport, cultural and leisure events. We welcome more than 3 million people every year to enjoy over 250 live events, our 196 acre Park and one of the best views of London. Having this virtual tour has really assisted with not only drawing new visitors to the venue but also in raising money to restore this beautiful building. We are very excited to launch the full tour with our new website. We have also been using the tour at events to showcase the venue through VR headsets. Jo and Emily of Striking Places were a pleasure to work with. Enthusiastic, warm and professional throughout. ”

Interesting Fact #94: In 1936 it became the home of the world’s first regular public “high-definition” television service, operated by the BBC. During WW2, television broadcasts stopped but BBC transmitters at Alexandra Palace were used in a secret operation to jam radio signals used by German bomber pilots to identify their positions and targets.